I'm having fun making these blocks in my "spare" time. I have stitched quite a few star blocks for my Courthouse Stars quilt top too - I think about eight this week.

I swear it! I have sewn the label down

I finished Pick & Choose last night, when I put the final stitches into the label. It was guild night, and I wanted to make sure I had SOMETHING for show & tell. I stayed up way past my bedtime and sewed it down, but I took the photo BEFORE leaving for our guild meeting.

Say...what do you think of the label? I cut that table cloth up that I posted a few posts back, and used the embroidered image of a squirrel as my label. I am rather pleased with the outcome!

I wonder what I will do with my new quilt... 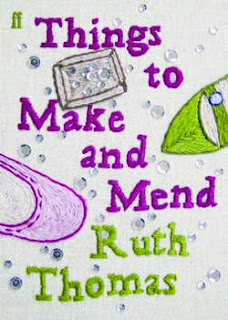 I found this book in the Crafts & Hobbies section of the Goodwill bookstore the other day, but it's actually a novel by Ruth Thomas, and a pretty good one at that!

Edinburgh-based author Ruth Thomas has garnered a reputation as a skilled, award-winning writer of short stories and makes a convincing transition to novel writing with her archetypal story of two women whose friendship is brought to a premature end by an unexpected and shocking event. Their career paths diverge dramatically; Sally becomes a professional needlewoman while Rowena travels the world as a translator, the pair coming together again when Sally wins an embroidery award and travels to Edinburgh to give a talk.
The premise of friendship between two contrasting females, their bond surviving personal crises and long distances, may bring to mind such 80s tearjerkers as Beaches, but this is an altogether subtler beast, eschewing mawkish sentiment. As with her story collections, the emphasis here is on the strength of the writing rather than sensational plot twists and turns. Thomas’ deceptively quiet tone and understated wit effects an unexpectedly moving and insightful tale.

I discovered a new quilt blog the other day: The Quilted Cupcake. There's eighteen episodes on iTunes right now, and I've listened to three of them so far and I've really enjoyed Jean's company!

Tomorrow is guild night - - and I've actually got a FINISH to share! I finished binding Pick & Choose. I'll get a photo up ASAP.

Posted by Nancy-Rose at 5:07 PM No comments:

I sewed a block today! I was inspired by photos on Nicole's Sister's Choice Quilts. Nicole was in turn inspired by Patti's Quilting Passion blog. She includes a FABULOUS tutorial, inspired by Marsha McCloskey's book "On to Square Two".
I just had to give the tutorial a try - you'll have to take a look at the photos on Patti's blog to see why it was so interesting!
Posted by Nancy-Rose at 7:24 PM 1 comment:

We've been looking at new cars for the last few weeks, and it's a really tough decision....makes, models, options....too much thinking!

Hubby really wanted me to get heated seats, but while I like the idea of a warm buns, particularly on cold Canadian mornings, the cost of such a luxury doesn't make sense to me - - you can't just add heated seats, you have to take a "package" which includes a bunch of nonsense that I really DON'T need, or want.

ME: You don't want heated seats; they'll just give you sweaty balls.
SALESMAN: The upholstery is stain and odour resistant.

A Little Sewing this morning

I picked up this tablecloth at a thrift store this week. It's covered with hand embroidered birds and little animals, plus a large centre scene about 15" or so across, of two colonial ladies. I plan to cut it up, and perhaps incorporate the birds into some sort of blocks. There's at least a dozen small birds, about 3" across or so?

Here are some quilting books I've recently picked up at various thrift stores over the last couple of months.

Another kitty picture, and a couple more thrifty finds. I love the print of this shirt - what a great fabric! It kills me that it's from American Eagle Outfitters, 'cuz I'm going to cut this very expensive shirt into quilt patches! I also found a pair of vintage 100% cotton pillow cases, and a fine muslin flat sheet from Walker's - so it must be at least 35 or 40 years old.

I packed up my school stuff, and headed to the library bright and early this morning and got through a good chunk of work. I sense a dim glimmer at the end of the this tunnel.

Itty Bitty's gr. 11 class went on a field trip to UWO today, the grand finale being a 3 hour psych lecture at MY campus, one floor up from where I was in lecture.

I was a giggly fool all day, 'cuz I had PLANS with Itty Bitty. See, Itty Bitty has an interest in Law (from a purely social justice framework of course, otherwise I'd have to drown him) and there just happened to be two fantastic lectures on Main campus this evening that we attended.

The first one was the presentation of a paper by Pamela Cross--a feminist lawyer--called "The Vengeful C**t Asked for It: Constructions of Women as Evil in Our Analysis of Rape ". One of the audience members mentioned this little gem that has been making the rounds of feminist philosophy depts:

If I thought LAST week was hell....omg.....this past week has been killer!!! By Wednesday, I was very nearly at the end of my rope, and ready to pack it all in. Thankfully, I was able to make some good contacts with 4th year students who got me calmed down, and explained that they had been through the same excruciating work load, and choking stress. I spent most of Wednesday in tears, and a good part of Thursday too...but the message I have clung to is that second semester will be better, and that I just need to duck and run to get through the end of this semester. Everyone has promised me that I will not fail out.

I have nothing quilty to share - - I have been writing essays. I have two to hand in this week, one the week after, and for the week of the 23rd? Two class presentations and a taped interview, transcript, and analysis. December...bah...just six essays within the first ten days of the month.
Posted by Nancy-Rose at 8:53 PM 4 comments: