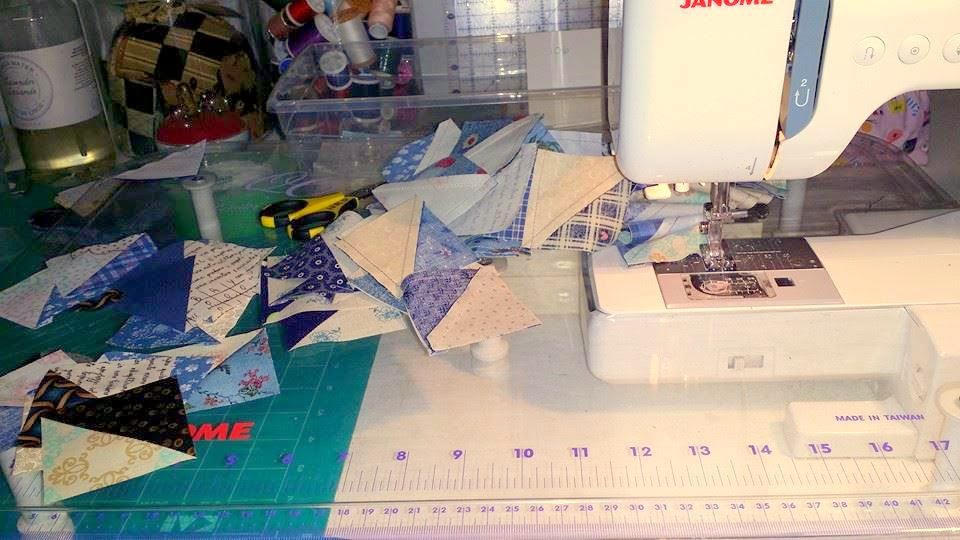 Working away on sewing HSTs into pairs, and then into Broken Dishes blocks for Jamestown Landing.  I worked on these while watching Quilt-Cam on Sunday afternoon.

It's been a little chilly in my basement sewing room.  I'm used to bare-footing my foot pedal.  I dragged a space heater into the hallway and aimed it into the doorway, but it was hard to moderate the heat - - simply no happy medium between arctic tundra and tropical heat.  I found a piece of carpet to put under my chair, and that helped a bit.  Then Hubby remembered that he had shut the furnace vent in my sewing room - - well golly gee! - - problem solved! 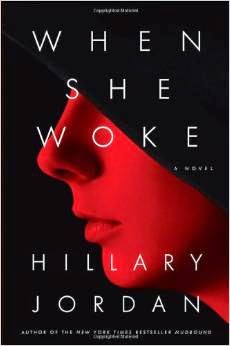 "When She Woke" is not something I would typically reach for, but it's this month's selection for Book Club, so I had to give it a try.  I picked it up a week earlier, and read the first three or four pages, and thought, "no...I can't read this...".  It's a dystopian novel set in the not-too-distant future, loosely reminiscent of "The Scarlet Letter".  But I picked it up again Sunday and finished it within a day. 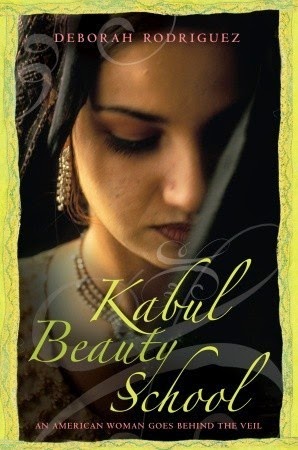 "Kabul Beauty School" had been on my shelf for a number of months.  I had heard of it several years ago - I think I might have seen a news story or a documentary about it?  I'm glad I picked it up - it was very readable!  I will recommend it to my social work practicum students in the future as a lesson (or rather -  many lessons!) in cultural competency. I couldn't put it down.

It was back to work today after a week at home, and I had lofty ambitions to solidify some plans and presentation material for a training event in three weeks.  Ugh...could NOT get into it!  Another half day tomorrow, and then I'm off again until the 5th of January.
Posted by Nancy-Rose at 7:24 PM 2 comments: 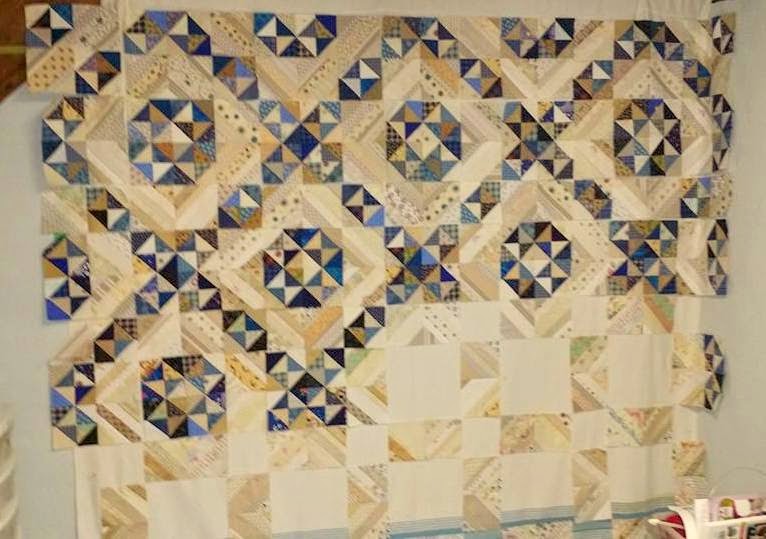 I can make any number of excuses about why I've been such a bad blogger these last few months....but talk about BORING!!!

1. I haven't sewn much over the past six months.  I recently have started flogging this old horse - Jamestown Landing from Bonnie Hunter's "String Fling" book.  Let 's do a little math.  The overall quilt centre (minus the borders) are made up of 21 x 18 little 4x4 blocks, each with approximately 8 pieces in them - roughly 3000 pieces.  Wow.

2.  I've applied to two universities to pursue a master's degree in Social Work.  I won't know for awhile yet if I've been selected.  Fingers are crossed.

3.  I bought a new memory foam bath mat - - the cat will not step on it.  It freaks him out.  I can now confirm--without any reservations--that THERE IS SOMETHING WRONG with my cat.

4.  Itty Bitty has just completed the first semester of his fourth year of undergrad.  Thirteen more weeks until he completes his degree.  This has been the shortest four years of my entire life.  He is also applying to grad school to complete a Master's degree in social work - different universities though.

This past semester he spent Fridays with me at my office doing an elective practicum.  It's been so much fun. Okay, not fun exactly. He has heard some truly horrific stories, and seen some hair-curling, run-screaming-into-the-street sorts of sights - - but certainly has the professional, non-judgmental, this-is-so-completely-normal, social-worky approach down SOLID. Besides, he's also really good at lifting heavy objects, mind-numbing clerical/administrative tasks, and run-down-to-the-courthouse-to-get-me-documents-and-while-you're-out-bring-back-coffee sorts of jobs.

5.  I've been reading quite a lot.  I also went to my first ever book club meeting to discuss "The Rosie Project" by Graeme Simsion.  I want to recommend this book to everyone I meet.  I understand it is going to be a movie - - and the movie just will NOT be as good. 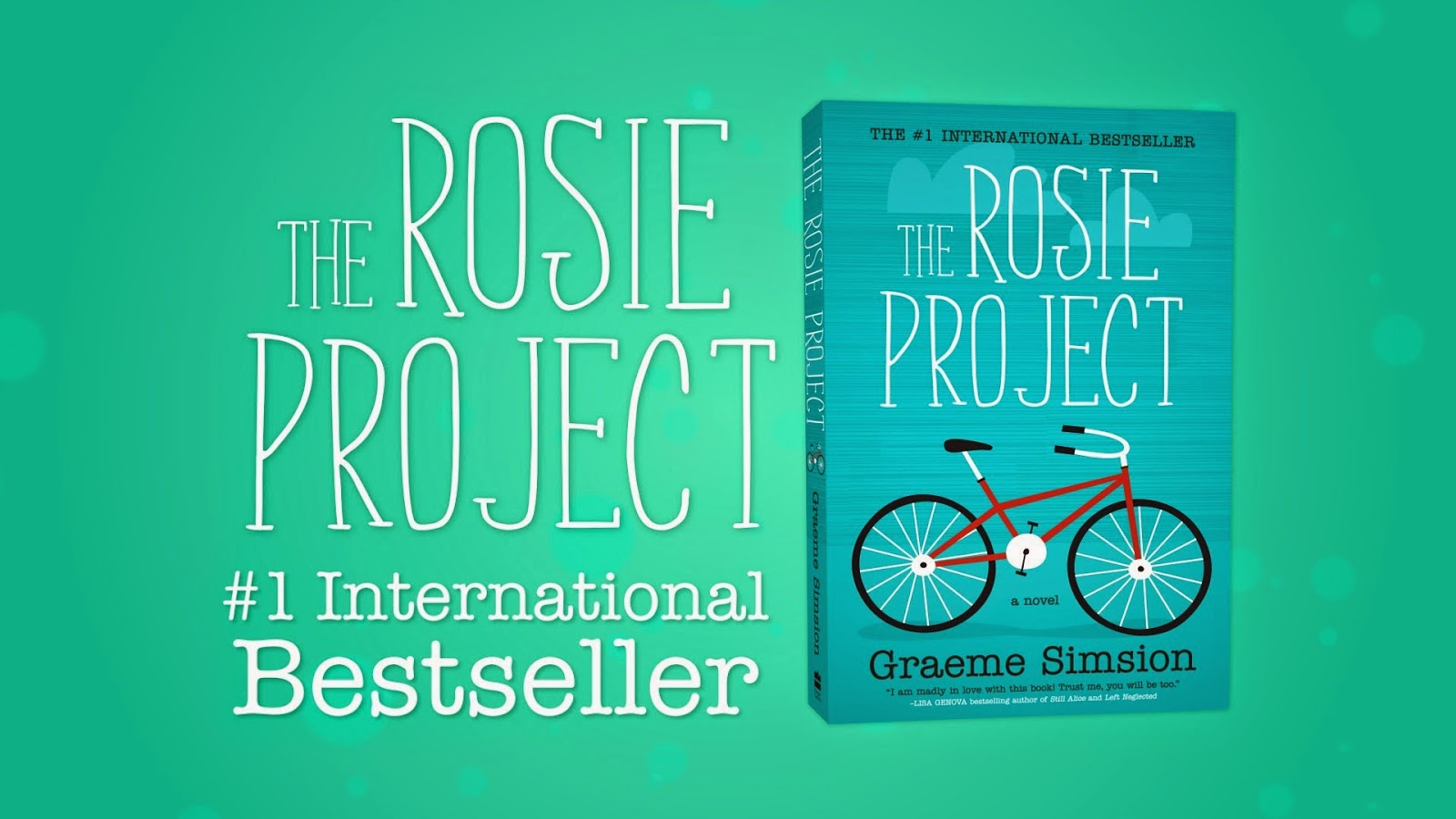 In the past 24 hours, I completely consumed "This Won't Hurt a Bit" by Michelle Au - very readable. 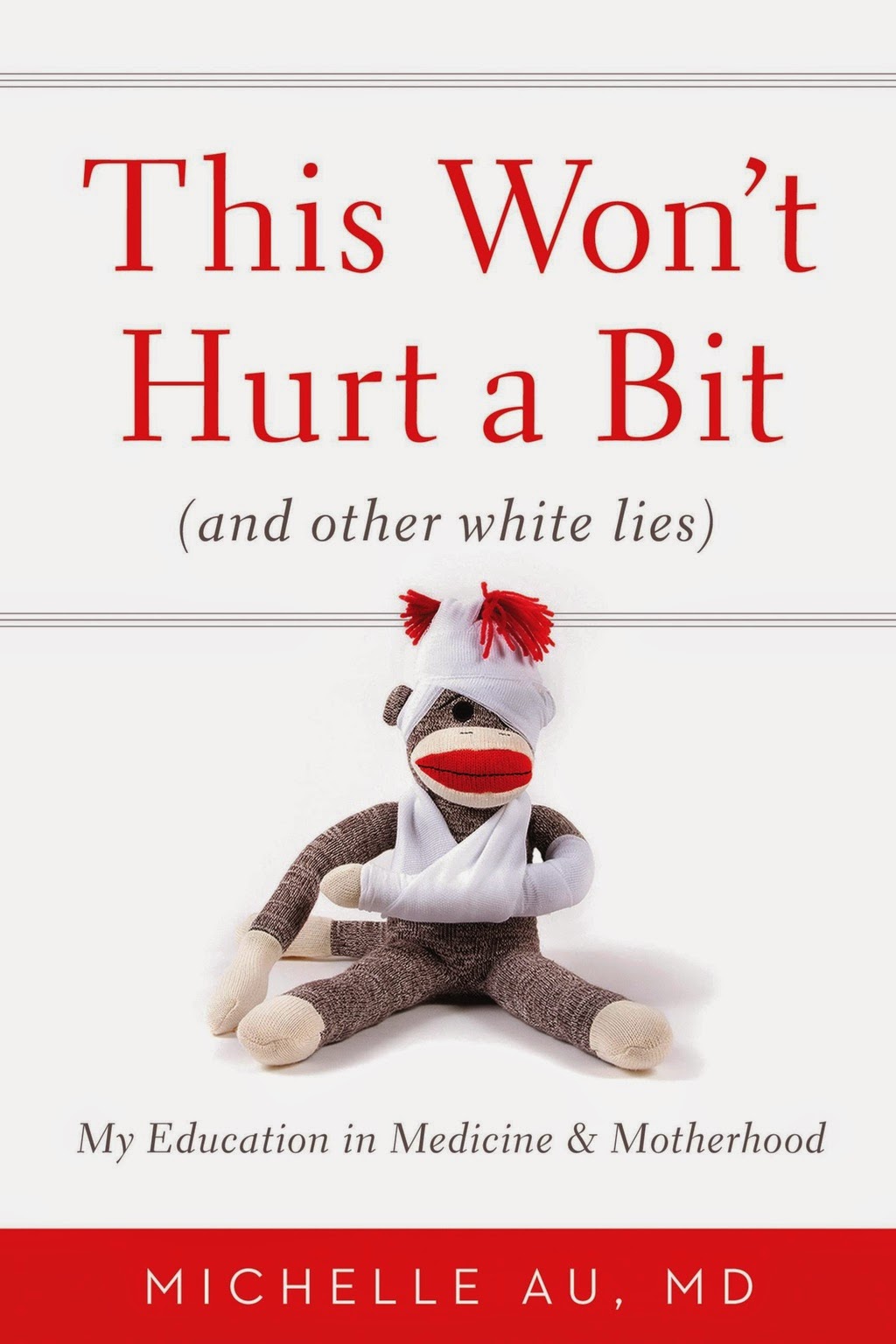 Lastly, I've been working through the "Outlander" series by Diana Gabaldon again.  I started to read them when they were initially published back in the 90's - but since watching the TV series in the summ...wait...WHAT?!?!? You haven't watched the TV SERIES?!?!?!?  Wow.  Go do that.
Anyway - the books have been re-released to coincide with the  television series premier in August and I have been yummying them up: