Guess where I am? 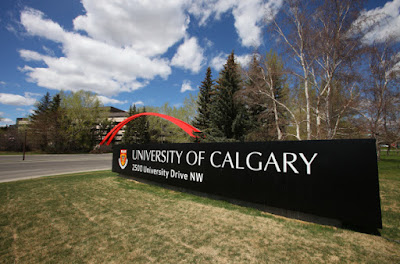 Yep - I'm at school.  Remember all the angst I went through from 2008 - 2011 doing my undergrad degree?  Well....I suspect the brain remembers university sort of the same way it remembers labour & delivery.... it wasn't THAT bad, and it was worth all the pain in the end.  So, I've enrolled in the Master of Social Work program - Leadership in the Human Service specialization - at the University of Calgary. So, while most of the program is online, I do have to actually travel to Calgary (a 4 hour/$500 plane trip across country) for a week twice over the next two years.

I flew in on Sunday night....well, actually Monday morning - my flight was delayed by four hours due to electrical storms that effectively shut down the airport in Calgary on Sunday morning, and backed up the skies for the rest of the day.  I didn't get to bed until 3:30 in the morning - and had to be in class for 9am. But...if that's the worst thing that happens to me this week....I'm good with that!

I've been in classes all day for two days - with articles to read and assignments to complete each night.  It's been tough - especially having crossed a couple of time zones.  Being a early morning riser, and barely making it to sunset before I'm tucked in at night...it's particularly challenging.  I keep looking at the clock and wishing it was telling me that it was much later than 8:15 mountain time.